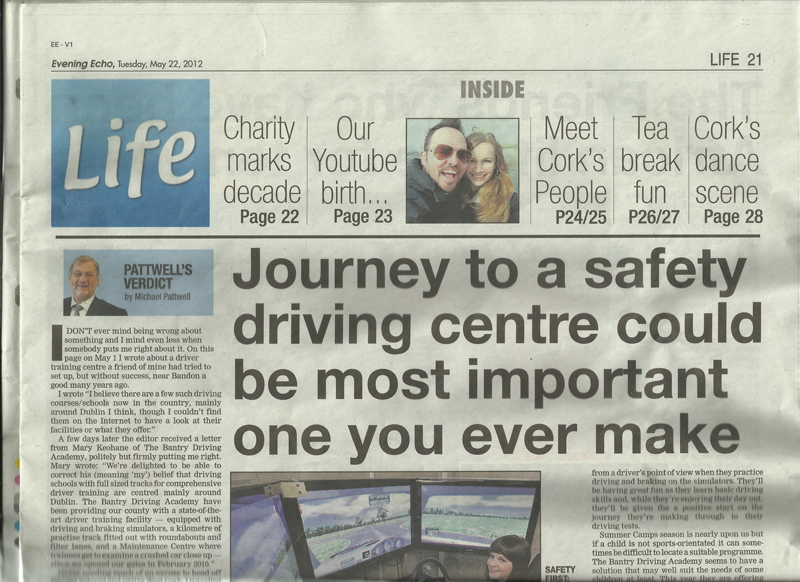 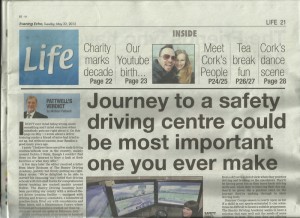 When Judge Michael Patwell called for better driver training in Ireland in a Cork Evening Echo article recently (May 1, 2012), we had to agree with him. The safety improvements we’ve seen in recent years are great, but they represent just the first steps on the way towards making everyone on Ireland’s roads safer.

After we read the article, we invited Judge Patwell to visit us, so that he could see for himself what we are doing to provide world-class driver training facilities for Ireland’s drivers, and we were delighted when he called out to see us here in West Cork. Writing in the Echo after his visit he noted that ‘It’s the perfect place to learn to drive, especially as you are unlikely to have a nerve-wracking audience.’

Judge Patwell joked that we might not like his idea that there should be more centres like ours around for people to access. He’d like the RSA to think about making the kind of training we provide compulsory before a driving licence or permit is issued. Now, while no business is keen on competition, we absolutely share his belief that Ireland needs real centres for excellence in driver training to give all of our new drivers the best possible start.

If you missed the article in the paper you can take a look here.

Driving Lessons with a Difference!

Take driving lessons at the Bantry Driving Academy, and you’ll start out on state-of-the-art driving simulators, build your skills on our practice track, and then progress to lessons on the public roads.

Our ADI driving instructors work with individuals, school groups, and clubs to provide expert road training in a fun and stimulating environment. Book now to get your driving career off to a great start! 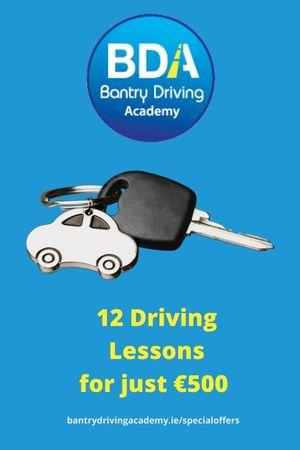